Our Undergraduate Research Scholar Emelia Lavender joined the project team in Summer 2018. The award of a UGRS scholarship enabled Emelia to focus on female composers and musicians who have set Baudelaire to music and/or performed his poetry as song. In the second of two blog posts, Emelia examines Diamanda Galás’s musical response to Baudelaire’s ‘Les Litanies de Satan’. *Long read*

In my previous blog post I outlined some of the challenges of investigating women’s musical responses to Baudelaire’s poetry. As part of my effort to bring to light some of these responses, I have conducted research on Diamanda Galás, with a particular focus on her 1982 setting of ‘Les Litanies de Satan’.

Diamanda Galás is a Greek-American singer, pianist, composer, performance artist, and political activist. She is best known for her activism through performance, mainly in response to the AIDS crisis and speaking out against genocide. Her performances garner shock, and at times abject horror. Their provocative nature resonates with Baudelaire’s own pushing against the boundaries of what is acceptable in art, which was met by the censorship of six poems from Les Fleurs du mal in 1857. Galás too has experienced censorship, and has spoken for example about the cancellation of an engagement with the New York Public Theatre in 1982 when the organiser heard ‘Litanies of Satan’ and decided they could no longer commit to showing her work[1]. While the poem ‘Les Litanies de Satan’ was not one of those condemned in the 1857 judgement, its blasphemous nature did earn it some discussion in the course of the trial. Baudelaire’s ‘satanic’ poetry has continued to be associated with provocative statements that are met with the threat of censorship, such as the Rolling Stones’ song ‘Sympathy for the Devil’, which was condemned by Tipper Gore who claimed in 1987 that it was one of the songs perverting children[2].

‘Les Litanies de Satan’ is the third poem in the ‘Révolte’ section of Les Fleurs du mal. The poem takes the form of a litany, a text of supplication usually chanted (often in call and response between clergy and congregation) in Christian liturgy. Baudelaire’s poem is a bastardisation of this liturgical genre, using a sacred form to invoke Satan. The direct address and liturgical associations inherent in the poem’s form imply that the text is to be voiced. Galás herself identified liturgical invocation as a vocal practice: ‘I use the voice in the same liturgical way that the mass has always been used […]. All masses are the same; all have the power to conjure up evil or the devil’[3]. Galás equates the power of the mass with the power of the voice. Galás’s vocal performance is certainly powerful. At over 17 minutes long, and filled with all manner of shrieks, grunts and operatic vocalisation alongside an impassioned declamation of the original French text, Galás’s ‘Litanies of Satan’ presents something of a vocal marathon. She has described the physical toll of such performances as ‘like a ripping of the flesh’[4] . She has spoken of the ‘athletic discipline’ required and has likened performance to warfare when she said that the idea of performing without perfect vocal technique would be like ‘someone going to war who didn’t know how to fight’ ; she describes singing as ‘an attack energy – the transformation of the body into a weapon[5].

In her virtuosic vocal display, Galás pushes the human voice to its literal breaking point, and in these cracks, shrieks and animalistic grunts, the bodily limitations of her voice become audible. For example, in a video recording of Galás performing ‘Litanies of Satan’[6], between each line of the poem from the second minute of the performance – where a singer participating in the Western classical tradition might typically aspire to silent, apparently effortless inhalation – Galás’s desperate gasps reveal the physicality of her performance and contribute to the accumulation of tension in her fervent delivery. Norie Neumark describes the breath as ‘ground zero of the voice’ in her account of the paradoxes of voice and embodiment[7]. Diamanda Galás’s vocal performance does away with the disconnect between body and voice which is inherent in bel canto sound ideals, where an undeniably physically demanding use of the body must appear effortless and free of strain or stress. The physicality of vocal production has been highlighted by Steven Connor in his essay ‘Strains of the voice’, in which he argues for an understanding of the voice and body as inextricably linked.[8]

When the voice is conceived of as a weaponised energy as described above, directed at the listener, ‘sing’ becomes a transitive verb. Neuroscientists Molnar-Szakacs and Overy have proposed a model for music cognition whereby a musical stimulus is perceived as a signal stemming from a bodily action, and the body processes this by activation of the mirror neuron system[9]. The listener’s nervous system is primed as if to produce the same action in the listener’s own body. The mirror neuron system has also been used to explain the mechanisms behind emotional empathy, and Molnar-Szakacs and Overy offer this as an explanation for the communication of musical affect. This account of musical cognition would suggest that the more audibly manifest the singer’s body, the greater the mirror neuron activation in the listener, and the more viscerally experienced the musical affect as a result. Through her embodied voice, or voiced body perhaps, Galás’s body acts upon the body of the listener. However, aspects of Galás’s setting seem to distance her voice from her body, both in live performance and via recorded media. The extreme virtuosity of her vocal display distances the resulting performance from anything the average listener might expect to produce with their own voice, which one could suggest might weaken the empathetic experience described above. Further to this potentially alienating virtuosity, Galás’s voice is also subjected to electronic manipulation at various moments during ‘Litanies of Satan’. The overlaying of multiple recorded tracks of her voice, coupled with the addition of artificial echo, spatial manipulation, and alterations to the frequency spectrum of the signal by means of a high-pass filter result in a discomforting dehumanisation of her performance[11].

We might assume that this dehumanisation is more profoundly felt when the piece is experienced through an audio recording, as opposed to in live performance complete with visual cues, but Galás also credits the high-pass EQ and a quadraphonic array of speakers with causing great discomfort to the audience in live performances[12]. Galás’s association of the audience’s extreme discomfort with directional and spectral qualities of the sound – ‘the high frequencies really fuck people up!’[13]– resonates with Nina Eidsheim’s proposal for a theory of singing as vibrational practice, inseparable from the material conditions of the emission and transmission of vibrational energy[14]. These parameters would not fall under traditional formal musical analysis, yet the discomfort experienced by Galás’s audience must surely form part of our analysis of her setting of Baudelaire, as this discomfort is inflicted by design, and used intentionally to create meaning in collaboration with Baudelaire and his text.

Another crucial aspect of Galás’s collaboration with Baudelaire is her decision to set the text in French rather than in translation. Galás’s French is heavily accented, as remarked by Helen Abbott[15], and we might assume that the audience, of her live performances in the USA at least, was predominantly not French-speaking. We might ask, therefore, what this means for the role of the original text and its meaning in Galás’s setting of it.

On the one hand, the use of a ‘foreign’ language can be seen to harken back to the poem’s bastardised liturgical form; both in the Roman Catholic tradition from which Charles Baudelaire came and in Diamanda Galás’s Greek Orthodox background, ancient foreign languages (Ecclesiastical Latin and Koine Greek respectively) are typically used in the liturgy. Therefore, to a monolingual anglophone audience to whom French is unintelligible, we might imagine that the use of French to refer back to this liturgical practice might contribute to the sense of religious (or Satanic) fervour that is built up in Galás’s setting. This ultimately culminates in Galás’s signature vocal effect, as she incorporates glossolalia into her performance. This too has religious connotations, as a practice that is associated with biblical mythology.

The linguistic unintelligibility of Galás’s setting, considering her use of both French language and glossolalia, might also be seen to highlight the audibility of her body in her vocal performance, as in the absence of linguistic structure it is bodily cues that take over in creating and communicating meaning. This prioritisation of non-linguistic communication might be read as indicative of Galás’s participation in a kind of musical ‘écriture féminine’[16]; however, in her interview with Andrea Juno for Angry Women, she seems to distance herself from this interpretation, saying: ‘some French theorists […] claim that some of the non-verbal sounds give you more levels of meaning, but I don’t necessarily buy that shit.’[17]

Galás’s decision to set the poem in French has been contrasted with another avant garde setting of ‘Les Litanies de Satan’, composed by Ruth White[18]. Like Galás, White’s own voice is a central feature of the setting, and like Galás, her voice undergoes dehumanising alterations. However, unlike Galás, the unsettling manipulations to Ruth White’s voice are all executed electronically; she does not physically push her body to the audible breaking points heard in the Galás setting. Ruth White’s compositional practice is firmly situated in the acousmatic tradition, whereas Galás’s main body of work is centred around live performance. The role of the body is therefore very different in each of these composers’ work. In addition, if we are to understand Galás’s linguistic obfuscation of the text’s verbal meaning to place the emphasis on bodily cues in her voice, we might also understand Ruth White’s direct translation of the French into simple English to place more of an emphasis on the linguistic structure and verbal meaning of the original poem (even if it is at times obscured by the electronic manipulations effected on the voice). Ruth White’s dehumanised voice is unsettling, but her work has not garnered the same sort of shock with which Galás’s has been met. This can undoubtedly be read in the context of their differing social backgrounds and Galás’s level of political engagement, but I would argue that the greater level of shock stems from the more acutely visceral experience of listeners in response to Galás’s work. This can be understood as subversive in the context of the siren myth, by virtue of the bodily physicality of Galás’s voice and work, and the power she assumes over the bodies of her listeners.

In conclusion, Diamanda Galás’s setting of ‘Les Litanies de Satan’ truly lives up to Baudelaire’s legacy of provocation and subversion. According to Walter Benjamin, the ‘shock experience’ is at the heart of Baudelaire’s poetry[19]; in the same way, Galás seems to place bodily shocks at the heart of her performances. In order to understand one aspect of Galás’s creativity and of her work with text, music, and the figure of the poet, we have had to step outside of the usual parameters of musical analysis, embracing the role of the body in musical cognition. Galás creates unique experiences, shocking the body and shaking our understanding of poetico-musical relations. 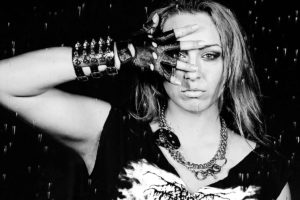