On 15 March 2019 the Baudelaire Song Project organised a showcase event at the Greater Birmingham and West Midlands Office to launch the online database of all song settings of Baudelaire’s poetry and to invite discussions around Baudelaire, music, and digital humanities.

Brussels was the ideal place to hold the first of our end-of-project celebration events. The city has strong connections with Baudelaire who lived there near the end of his life. Even if he disliked the city – he wrote a long essay on this, Pauvre Belgique – it is a place that allowed him to publish his censored poems. Brussels is also a symbolic city for European exchanges – the event was taking place in the European quarter – which were also a prevailing theme for our event through the idea of crossing geographical and artistic borders.

The database was officially launched and is now accessible on our website under the ‘Search’ tab. The database is intended for musicians looking for song ideas, for researchers interested in relations between poetry and music, for French teachers looking for new material to work on, and for anyone interested in French poetry and music. The database can be searched by poem titles, song titles, and composers but also by year of composition, musical styles and languages.

The database will be updated regularly and some search criteria will be added. Several data visualisation tools and playlists (for classical and non classical music) are also accessible in order to explore further the variety of song settings.

The day started off with Professor Helen Abbott (University of Birmingham), Principal Investigator of the Baudelaire Song Project, who presented the original inspiration for the project and its evolution. She recounted how Baudelaire has accompanied her life from a young age, first as a singer, then as an undergraduate student of French, and finally as an academic. Already four years ago when she and co-investigator Dr Mylène Dubiau sent the proposal for the project, they knew it is not only Baudelaire’s verse poetry that had been set to music but also his prose poetry, his art criticism, and his correspondence. Helen Abbott summarised the four years of project by answering a simple question: What has this project taught us about Baudelaire? The project not only confirmed that Baudelaire is famous everywhere, but it also brought to light the fact that he is multidimensional: each person knows one version of Baudelaire. This project has showed us the complexities of the interactions between all the images, all the versions of Baudelaire. It is a complex network for which the digital analysis has helped us to see all the connections and how they can be fixed and rigid or flexible and unstable. Moreover, this project has forced us to look at and hear more closely all the poems and not just the most famous ones. The variety of song settings discovered inevitably makes us pay attention to poems and music in unprecedented ways.

Research Associate Dr Nina Rolland (University of Birmingham) then showed the database and presented some highlights from the 1637 song settings of Baudelaire’s poetry. For example, we learnt that half of the song settings are classical music compositions, one quarter can be categorised as ‘chanson’, and one quarter correspond to the other genres (rock, pop, death metal, reggae, jazz, etc.). Among the 700+ musician-composers found, around 150 are bands or collectives, 550 are male composers, and 53 are female composers. All the poems from Les Fleurs du mal have been set to music, but some much more than others. The poems the most frequently set to music are: ‘La Mort des amants’, ‘L’Invitation au voyage’; ‘Harmonie du soir’, ‘Recueillement’, and ‘La Cloche fêlée’.

Dr Mylène Dubiau (Université Toulouse Jean Jaurès), co-investigator of the Baudelaire Song Project, talked about the most represented genre in our database, the mélodie française, and presented her ongoing research on a critical edition of Debussy’s Cinq poèmes de Baudelaire. The mélodie française genre re-discovered Baudelaire’s poetry with a new edition of Les Fleurs du Mal in 1887. For his compositions on Baudelaire, Debussy paid a particular attention to the material on which they were published; he wanted to create a true aesthetic object. These compositions are a turning point in Debussy’s style inasmuch as they allowed him to explore new forms, structures, and harmonies.

Dr Laurent Robert (Université Catholique de Louvain/Haute Ecole en Hainaut) shared his experience as an academic who teaches Baudelaire but also as a poet himself with a presentation entitled ‘Ecrire des sonnets (d’)après Baudelaire’.  He interrogated how Les Fleurs du Mal can be taught to students not only as an academic object but also as an object of pleasure. He then looked more particularly at the sonnet form as a fixed form calling for variations. Baudelaire used the sonnet in an inventive way, we could even go as far as saying that the sonnet form is marked by a before and an after Baudelaire. Dr Laurent Robert finds his inspiration in Baudelaire and Mallarmé for his own sonnets, which include ‘Les futals’, ‘Anvers’, ‘Sainte-Beuve (procrastination)’, and ‘Sardines’.

It was a privileged for us to have François Le Roux (Centre de la Mélodie française), a world-renowned French baritone, who talked about all the mélodie settings of ‘Les Hiboux’. Despite the famous setting of the poem by Déodat de Séverac composed in 1898 and published in 1911, it is a poem that is not set to music frequently. Other mélodie settings of the poem include Marie Jaëll’s, Louis Vierne’s, and Léo Ferré’s. François Le Roux highlighted the difficulty for composers to represent both the ideas of immobility and of movement present in the poem. Generally, the dark atmosphere of the poem is often translated through minor tonalities in the mélodie settings.

Dr Andrea Schellino presented the ‘Groupe Baudelaire’ (Institut des textes et manuscrits modernes, CNRS/ENS Paris) which works on a critical edition of Baudelaire’s work and correspondence. The group gathers 40 international scholars and organises regular events and seminars to invite discussions on Baudelaire’s works. Through a study of genetic criticism, the group also aims to digitize Baudelaire’s work and particularly his correspondence which includes around 1550 letters. The digitized texts will be annotated and the manuscripts (when possible) will be provided. This ‘Baudelaire numérique’ (‘digital Baudelaire’) project aims to expand the knowledge of Baudelaire, his work, and the relations with his contemporaries, including musicians.

Dr Caroline Ardrey (University of Birmingham), Senior Research Associate on the Baudelaire Song Project, explained how the project has used digital tools to analyse versification in songs. She presented the free software Sonic Visualiser and how marking the duration of words, syllables, and lines on audio files has helped us to understand how composers and songwriters handle the challenges of setting French verse meter to music. She also mentioned that collaboration is key to the success of digital humanities.

Dr Nina Rolland briefly presented the school project run in 2018 at the University of Birmingham School and consisting of song writing workshops in French for KS3 students. A teaching pack will be available soon on this topic.

The day ended with a live performance by Belgian band Exsangue. The pop-folk band played song settings of Baudelaire’s poetry, including ‘A une Malabaraise’, ‘Parfum Exotique’, and ‘Les Metamorphoses du vampire’. The songs were creatively linked with anecdotes on Baudelaire’s life and work. 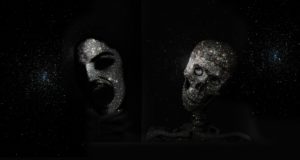