In a series of blog posts in English and French, we explore the question “Should feminists read Baudelaire?” Baudelaire himself seems to suggest we shouldn’t: «Ce n’est pas pour mes femmes, mes filles ou mes sœurs que ce livre a été écrit» (“This book was not written for my women, my daughters, or my sisters”). But is this really fair?

Earlier this year, we launched our ‘Baudelaire and Feminism’ blog series, inviting international Baudelaire specialists to respond to the question ‘Should feminists read Baudelaire?’. Our latest post is by Fiona Dakin whose doctoral research on ‘visual translations’ of Baudelaire has uncovered and analysed multiple visual-arts responses to, illustrated editions of, Baudelaire’s Fleurs du mal. Through archival work at the Bibliothèque nationale de France and the W. T. Bandy Center for Baudelaire and Modern French Studies at Vanderbilt University, she has located around 130 illustrated books dating from 1888–2015. She has presented her work at major international conferences, and won the 2017 Society for French Studies Annual Conference Postgraduate Poster Prize.

The provocation of the question at hand in this blog series, “Should feminists read Baudelaire”, is difficult to resist. As Rosemary Lloyd states in the first response of this blog series, it is hugely problematic to dictate what a feminist ‘should’ or ‘should not’ read; also, feminist readings enrich our understanding of a poet whose canonical status is not disappearing any time soon (indeed, we ignore feminist interpretations of Baudelaire’s work at our peril). Secondly, as Maria Scott elaborates in the second response of this series, Baudelaire’s writing is notoriously layered with multiple, and often contradictory, meanings, which in fact makes it quite difficult to authoritatively label the man and his work as ‘misogynistic’, or not.

I hope to make two small contributions to the series in this post. I will first provide a few examples of women artists illustrating Les Fleurs du mal, as tangible examples of women and feminists reading Baudelaire. Then, to finish, I will attempt to argue from the other side of the debate sparked by the 1935 article, suggesting reasons why certain feminists might sometimes choose not to read Baudelaire.

My PhD project on illustrations of Les Fleurs du mal and Le Spleen de Paris has involved collecting over 125 different illustrated editions of the two works. Of these, only 20 are illustrated by identifiably female artists (though it always remains possible, especially in early works, that a female artist might have used a masculine pseudonym).

One of my favourites (I probably shouldn’t have favourites, but I definitely do) is by Dominique Jouvet-Magron, in a series of prints, exhibited in 1929, titled Les VI poèmes des Fleurs du mal condamnés en 1857, followed by a further IX poèmes des Fleurs du mal. The condemnation Jouvet-Magron refers to was a trial shortly following the publication of the first edition of Les Fleurs du mal. Six poems were found guilty of “outrage à la morale publique et aux bonnes mœurs”, and were subsequently banned, until the judgement was finally lifted in 1949. Jouvet-Magron’s exhibition therefore technically broke the law, as she wrote the text of the six banned poems alongside her illustrations. What is perhaps more illicit, though, is the frankly pornographic visual content of the portraits illustrating the text. Jouvet-Magron depicts sadomasochism, lesbian oral sex, and female masturbation, all entirely uncensored. In addition to this highly modern depiction of female sexual desire, and of homosexuality, Jouvet-Magron also presents racially diverse figures, and gender-queer details such as male figures in bold make-up.

Much like Baudelaire’s poetry itself (as identified by Maria Scott), the meanings behind Jouvet-Magron’s illustrations are difficult to pin down. Is she inspired by Baudelaire’s boldness in the face of a repressive and censorious Second-Empire society? Does she perpetuate the women-as-object trope through her paintings of female nudes, or is this counter-balanced by a smattering of similarly decorative male nudes? Does she illustrate women in control of their own sexuality in rebellion against an interpretation of Les Fleurs du mal as focusing on the male sexual experience? Does she cater to, or challenge, the male gaze? It would seem to me that any one of these interpretations of these illustrations is valid, or indeed that they are all simultaneously true, and that this multiplicity of possible meanings adds an extra element of kinship between Jouvet-Magron’s illustrations and Baudelaire’s poetry.

Other illustrations of female nudes for Les Fleurs du mal by women artists provoke similar questions to Jouvet-Magron’s work, such as Leonor Fini’s 1964 collection. But later female illustrators, such as Alison Hildreth and Sophie Verbeek, move away from the work’s erotic surface with interpretations that are more abstract. Indeed, ‘abstract illustration’ carries within itself an intrinsic paradox between abstract art, which deliberately moves away from description and literality, and illustration, which at its base level means to illuminate or explain. In my opinion, this paradox adds to the intrigue and complexity of these women’s interpretations, and the multiple meanings already inherent in abstract art (what does a Jackson Pollock painting “mean”?) again taps into the multiplicity of meanings that can be read in Baudelaire’s poetry.

A tentative case against choosing to read Baudelaire

My case against reading Baudelaire is somewhat tongue-in-cheek, given that I have made a living over the past three years precisely from reading Baudelaire. While I thoroughly agree with the previous respondents that feminists should not not read Baudelaire (and with good reason), I would hesitate to recommend that feminists necessarily should read – and teach – Baudelaire. This is because the decision to ‘read Baudelaire’, particularly when it comes in the form of a curriculum or reading list, might be at the expense of reading women writers. Of course, a “both-and” approach is preferable: we can read canonical male writers as well as female and otherwise marginalised writers. However, in order to create a curriculum or reading list which is de-colonised, de-centralised, and no longer exclusively male, we will need to make space. And while the “both-and” approach is admirable and useful, there comes a point when making space must involve sacrificing some reading of canonical male writers – Baudelaire, or Hugo, or Zola – simply because for so long they occupied the entire curriculum.

So, while we should of course not feel the need to give up our metaphorical badges of feminism in order to read Baudelaire, in doing so we must remember not to overlook women – and otherwise marginalised – writers of the 19th century. Luckily for us, there are some great options, such as George Sand (whose work is still notoriously difficult to find, with under a third of her over 80 novels available in print for the mass market today*), Marceline Desbordes-Valmore (whose poetic innovations are often overlooked, arguably at times in favour of Baudelaire’s, which in fact came later), and Rachilde (who famously called herself ‘Mademoiselle Baudelaire’).

*With thanks to Sand scholar James Illingsworth of Queen’s University Belfast for drawing my attention to this statistic. 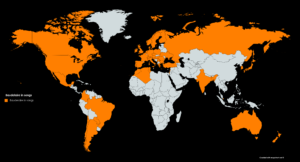