It is somewhat remarkable that the poetry of Charles Baudelaire has come to influence such a variety of musical genres across so many years of creativity and experimentation.  This A-Z explores some of the eclectic musical styles that Baudelaire’s lyricism has influenced.

A is for Alexander Gretchaninov – Russian Romantic composer (1864-1956).  In 1909, Gretchaninov composed an evocative and dramatic song cycle for tenor and piano – Les Fleurs du Mal (op. 48), setting 5 poems by Baudelaire, translated into Russian.

Charpentier, Gustave (1860-1956) – a French operatic composer who set a number of Baudelaire’s poems for voice and piano including ‘La Cloche fêlée’ and ‘Parfum exotique’.

Diamanda Galás – an American avant-garde artist whose debut album, The Litanies of Satan, released in 1982, uses English translations of Baudelaire’s texts in experimental, innovative and challenging ways as Galás controversially manipulates the human voice, obscuring the words and diction, presenting Baudelaire as it had never been heard before.

E is for ‘extreme ritual metal’ – how the Italian symphonic black metal group Darkend best describe their genre. Darkend’s first studio album, released in 2008, draws inspiration from Baudelaire’s Les Fleurs du mal and directly uses English translations as lyrics and song titles.  This genre is a sharp contrast to Debussy’s classical Baudelaire song settings, demonstrating the wide range of musical styles that Baudelaire’s texts have infiltrated.  Follow the link to hear Darkend’s use of Baudelaire’s text in their song ‘Destruction’.

Gautier, Théophile (1811-1872) – this French writer, journalist and philosopher would meet Baudelaire regularly along with other littérateurs, joining discussions in esteemed social circles.  Baudelaire and Gautier were good friends, so much so that Baudelaire even wrote a dedication to Gautier in Les Fleurs du mal.

Harmonie du soir — a lyrical poem by Baudelaire, this is one of the most frequently set texts by various musicians, including the dynamic French composer and performer, Léo Ferré (1916-1993) who offers a vibrant and playful rendition featuring lilting accordion and effervescent violin performances.

Invitation au voyage – another poem often used in song settings, this Baudelaire poem was set in the year 1870 by two composers – Chabrier and Duparc.  Although Chabrier’s setting was published much later than Duparc’s, the emergence of each composer’s setting, composed in the same year inevitably led to some comparison.  Duparc’s composition is pensive and melancholic, whilst Chabrier’s offers more optimism and anticipation of great adventure.

Jet d’Eau – both Baudelaire’s poem and Debussy’s song setting of this text (composed 1887-9), create a soundscape, exploring onomatopoeic features in syllables, words and notation, illustrating the fluidity and playfulness of the movements of water.  Here is a recording of soprano Eleanor Garside, performing Debussy’s Le Jet d’Eau from the song cycle ‘Cinq Poèmes de Baudelaire’ recorded in the RNCM’s Opera Theatre at the 2012 Chamber Music Festival.

Knot – written in 2001 by Dutch composer Astrid Kruisselbrink, Knot is a composition for soprano, mezzo-soprano and orchestral based ensemble, which features original French text from Baudelaire’s Les Fleurs du mal poems ‘La Chevelure’ and ‘La Beauté’, in addition to text in other languages from various authors including Ovid, Goethe and Virginia Woolf, in whispered, spoken and sung phrases (spoken word begins at 0.49 seconds).

Litanies de Satan – this poem from Baudelaire’s Fleurs du mal explores challenging and controversial religious themes, arguably providing opportunities to discuss and offer opinions on such matters, which may explain the popularity of this setting with various artists.  ‘Les Litanies de Satan’ has been explored in several languages by musicians of various nationalities, suggesting a universal intrigue or appeal.

For example, Miriam Gideon’s song setting ‘The Condemned Playground’, composed in 1963, includes a setting in English of Baudelaire’s ‘Les Litanies de Satan’ (although lyrics for the refrain are kept in Baudelaire’s original French).  In Gideon’s work, dissonant instrumental accompaniment and angular vocal lines capture a sense of tension and conflict, reflecting the context of the thematic material in the poem.

Naoumoff, Émile (b.1962) is a Franco-Bulgarian pianist and composer who has set two Baudelaire poems – ‘Harmonie du soir’ and ‘La Mort des pauvres’. Naoumoff’s ‘Harmonie du soir’ can be heard on his website, performed by mezzo-soprano, Mary Ann Hart.

Orchestration – song settings of Baudelaire’s poetry have not only extended repertoire of vocalists, but equally, instrumentalists.  The scoring of certain settings sparks particular interest.  For example, in Alban Berg’s Der Wein, with the addition of a saxophone alongside more traditional orchestral instruments.  This instrumentation constitutes the use of jazz and tango influenced rhythms and harmonies, whilst the saxophone adds interesting colour to the orchestral sound world.

Pascal d’Aix was a French consul and musician who in 1882, created a song setting of Baudelaire’s ‘L’invitation au voyage’.  Pascal d’Aix dedicated this setting to fellow musician and composer, Paul Dukas.

De Saint-Quentin, Gabriel – French composer (1846-1926) who composed a setting of Baudelaire’s ‘Harmonie du soir’, adding to the extensive collection of settings of this popular poem.

Rollinat, Maurice – French poet (1846-1903).  Also a skilled musician, Rollinat set some of his own and eighteen Baudelaire poems to music for voice and piano and performed these settings himself at Le Chat Noir in Paris. Rollinat was an avid reader of Baudelaire’s poetry and evidently, enjoyed engaging with Baudelaire’s work with additional musical connections.

S is also for Sonic Visualiser – (just to add a minor 27th letter to the alphabet!?). However, more importantly to highlight that this digital humanities technology is being used to research and uncover specific structures in musical settings of Baudelaire’s poetry.  Pretty sure neither Baudelaire himself nor the first composers to produce song settings of his poems would’ve imagined seeing their work in relation to this format, but it’s significant that we can examine poetry and song in more ways than words on paper and notes on a stave.

The Cure – English rock band who released their album, Kiss Me Kiss Me Kiss Me in 1987 featuring the track ‘How Beautiful You Are’ which is an almost word for word translation of Baudelaire’s poem ‘Les Yeux des pauvres’.  Robert Smith, vocalist in The Cure reflected upon a book of Baudelaire’s poems and found ‘Les Yeux des pauvres’ had a notable impact, leading to the inclusion of the text as lyrics for this song.

Universal appeal – why is it that Baudelaire’s poetic texts are used by so many artists in a variety of languages, styles and genres?  The themes and ideas in Baudelaire’s work are as relevant today as the day the texts were written, amounting to the surpassing of generational and cultural differences.  The continuous reworking of Baudelaire’s poems into musical formats, continues to expand Baudelaire’s influence across modern day cultures and new generations, creating new musical output whilst maintaining integrity and interest in the history and original source of the written texts.

Verlaine, Paul (1844-1896) was a French poet who, alongside Baudelaire was associated with the Decadent movement, exploring ideology surrounding excess, indulgence and aestheticism.

W is for White – Ruth White is an American composer of electronic music.  In 1969 she recorded Flowers of Evil, taking the translation of Baudelaire’s Fleurs du mal for the title.  This album was an opportunity to create an experimental soundscape based on Baudelaire’s poetry, as White recites direct English translations of Baudelaire’s words over synthesisers, multi-track performances, edited with reverb and delay, white noise and electronic sound filters.  Extracts from Ruth White’s Flowers of Evil can be heard here.

Y is for Les Yeux de Berthe – a Baudelaire poem from Les Fleurs du mal, set in song in 2006 by French singer/songwriter George Chelon.  An extract of ‘Les Yeux de Berthe’ can be heard here.

Zemlinsky, Alexander (1871-1942) was an Austrian composer who set Baudelaire’s ‘Harmonie du soir’ in German translation as Harmonie des Abends.  However, this translated setting was only ever shared in private performance at the Prague Society for Private Musical Performances in 1922, and remained unpublished during Zemlinsky’s lifetime.

Albeit in a slightly leapfrog approach, following Baudelaire in an A-Z rather than exploring chronology reveals the extraordinary variety of musical genres that Baudelaire’s poetry has influenced.  Baudelaire’s original texts and translations in various languages continuously infiltrate the creative outlet of musicians pursuing various styles and experimentation in composition, song-writing, recording and live performance. 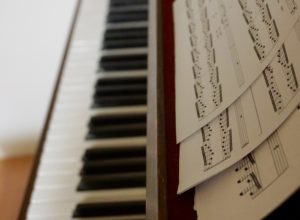 Want to hear more about our research?
2017 is proving to be busy year, with a number of…