When you imagine some of the cityscapes evoked in Les Fleurs du Mal, Kiev might not be the first place to spring to mind. But it’s in the Ukranian capital that Belgian folk-chanson band Exsangue chose to shoot the video for their début single, a modern acoustic setting of Baudelaire’s ‘À une Malabaraise’.

In a comment published on the Maxi-France website, Exsangue’s founder and composer, Philocène Istépédon, explains the various cultural influences which the band bring to their modern, folky musical adaptation of ‘À une Malabaraise’: ‘the setting for the video was inspired by “From Hell”, starring Johnny Depp. The film, which is about Jack the Ripper, is set about the same time [as Baudelaire’s poem was written]. There are many references to the film in the video (the most obvious being the bunch of grapes).’[1] As scholars working on song settings of Baudelaire’s poetry, we’re very aware of the many possible ways in which musical adaptations of literary texts can shape our reading of a particular poem, adding new layers of insight and changing the way in which we understand words and images. The carefully thought out aesthetics of Exsangue’s music video point to another aspect of word-and-music relations, which is often neglected in literary studies — the role of the visual when poetry is performed as song.

Of course, live music has always been about sight as well as sound. In classical genres, the visual dimension of song most often comes from the performer(s), appearing upon a stage: the way a singer dresses, their posture, body language and facial expressions all contribute to telling the story of a song. In popular culture — particularly in the twenty-first century, where music videos are almost ubiquitous, from MTV to YouTube — music is no longer just an auditory experience. Exsangue draw attention to the accessible and the comic dimension to Baudelaire’s poetry, and they achieve this as much through the visual as through the music itself. The repeated shifting between shots of the band in an industrial warehouse, performing on steampunk-style instruments, and the story of the poem, which is vividly portrayed by actress Katrin Lanfire, interweaves poetry and song in exciting new ways. Through convergences and tensions between word, music and action, Exsangue’s video for ‘À une Malabaraise’ invites new readings of Baudelaire’s poem and showcases the importance of considering visual media when studying song.

The link to Jack the Ripper, the industrial nineteenth-century inspired setting and the carefully constructed costumes of the heroine in Exsangue’s video for ‘À une Malabaraise’, all combine to foreground the narrative quality of the text, presenting the audience with a visually appealing version of the tale of a woman who leaves her home behind to chase a dream which, ultimately, leads her to a life of begging and prostitution. As the band readily admits, they’ve used some poetic licence in their re-presentation of ‘À une Malabaraise’: the boat upon which the eponymous figure arrives in France is transformed into a train, which brings Exsangue’s heroine, instead, to Kiev. The video follows her as she alights, the train doors serving as a portal to another world. Although the locations have been changed, the exotic land of ‘ananes et bananes’ seems suitably at odds with the cold grey scenery of the Ukranian capital, seen as the heroine steps off the train, reinforcing the sense of estrangement and alienation which are at the heart of the poem. This reinterpretation of the locations described in ‘À une Malabaraise’ underscores the versatility of Baudelaire’s poetry and the continued relevance of the themes approached in his work; indeed, as Philocène Istépédon explains, ‘the context of the poem is really topical – immigration, refugees, people who leave their homeland full of hopes and dreams, going down the road of exile and simply ending up in a different kind of hell.’ [2]

The horror of the heroine’s new situation is vividly presented through the video, which, coupled with the structure of the music, divides the song into several episodes. With the final stanza of the poem we follow the protagonist on the screen as she passes along a darkened corridor and goes to begin her new life of prostitution. The camera zooms in on the large doors to the master’s mansion, which, like the train doors earlier on, offer a gateway into this long-anticipated existence full of promise and disillusionment: the protagonist waits anxiously in front of these heavy wooden doors for some time, contemplating her fate, before crossing the threshold into this murky world. The change of clothes and of setting come at a turning point in the song, which maps onto the speaker’s prediction that the Malabaraise will soon regret her decision to give up the freedom of her old life: ‘Comme tu pleurerais tes loisirs doux et francs’. Her bold new outfit is representation of her new life and emphasises her submissive role within this sumptuous boudoir, both visually and figuratively evoking the restrictions of the ‘corset brutal emprisonnant [ses] flancs’. Although, physically, the figure lacks the ‘grands yeux de velours […] plus noirs que [sa] chair’, instead she assumes the qualities of the night itself, through her red dress, which echoes the scarlet mantel of the night presented in Baudelaire’s poem. The visual elements of the music video such as costume and place serve to weave the poem’s exotic themes, and the nineteenth-century sexual politics it evokes with a contemporary socio-cultural context as well as with modern musical and cinematic conventions.

This newly-released setting of ‘À une Malabaraise’ is set to be the first of a whole series of Baudelaire settings by Exsangue. Based on their début, the band’s future output promises to make a very exciting contribution to musical adaptations of Baudelaire’s poetry, showcasing not only the continued relevance of his oeuvre, but also highlighting the role of music videos in studies of modern transmedial adaptations of poetry.

[2] Interview with Philocène Istépédon for The Baudelaire Song Project, October 2016. 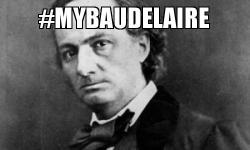