by Helen Abbott and Caroline Ardrey

“My metal throat can speak all languages”. So claims Baudelaire in his threatening poem about the relentless passing of time, called The Clock. We took this phrase as our starting point when we began to explore the different kinds of musical languages Baudelaire’s poetry ends up in.

Metal music is an important genre for Baudelaire reception, and extreme subgenres such as death metal and black metal provide prominent examples of bands being inspired by Baudelaire’s darker texts. It seems to be an obvious link, perhaps even a cliché. When Baudelaire writes about the devil, evil, or death, surely that’s what’s going to attract black metal musicians. But the reality is more complex than that. There is never a simple link between a theme in a poem and why it gets chosen by musicians working in a particular genre. It’s true that black metal music privileges the subversive and alternative, and often explores obscenity, evil, and demonic figures, but it goes much further than that.

We have identified a cluster of settings of Baudelaire’s Les Litanies de Satan by seven black metal bands, in French, English, Norwegian, Russian, and Spanish.[1] None of the black metal reworkings of this poem are produced by French bands (the bands are Belgian, Greek, Italian, Mexican, Norwegian, and Russian). Like a lot of the songs we have uncovered through the Baudelaire Song Project, all of the groups manipulate Baudelaire’s text in various ways, but we have identified two techniques which are distinctive to the black metal aesthetic (we provide fuller schematic and summary analyses here).

Purists might say that this is a travesty – what are they doing to Baudelaire?! But our view is that the black metal settings we have uncovered reveal a multi-layered Baudelairean soundtrack that makes his poetry sound excitingly different. They use his texts in cleverly nuanced ways and show us how the beneath the surface of the cliché, the unconventional restructuring and the alternative performance styles produce a deep interpretation of Baudelaire as a spokesperson for the marginalised. Song settings of poems are much more than simple alloys of words and music. They do not do away with tradition, but they challenge us to rethink it. In black metal versions, Baudelaire’s poetry gets whispered, chanted, shouted, and growled in an exhilarating take on what poetic language can do to us. 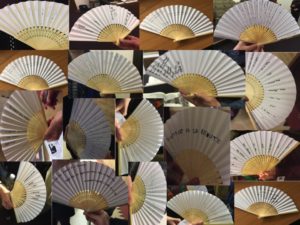